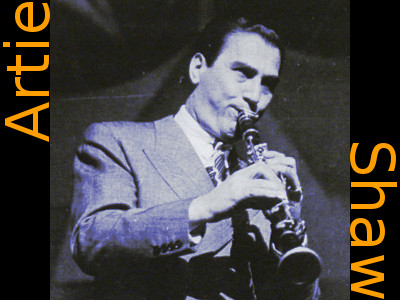 Artie Shaw was born in New York City on May 23,1910 and he became one of the top bandleader/soloists of the swing era. In the early thirties he became one of the most sought after lead alto saxophone players in the New York area and prospered with the growth of radio and studio recordings. He perfected his craft with such dance bands as Irving Aaronson and Roger Wolfe Kahn, and began to concentrate on the clarinet. During this time he committed himself to a rigorous course of self improvement in the humanities and became highly literate and extended his musicality to include the impressionism of Ravel and Debussy and modernism as expressed by Stravinsky and Prokofiev.

By 1936 young America was celebrating the music of Benny Goodman, the Dorseys and the Casa Lomans. Artie Shaw, although highly respected in the business was still unknown to the public. A New York promoter, Joe Helbock, was putting on a night of Swing Music at New York's Imperial Theatre and he invited Artie Shaw to form a band for the event. Shaw now exclusively a clarinettist, formed an unusual jazz combo with a string quartet. It was the hit of the evening and he was prevailed upon to make it a permanent unit. This Artie did but it failed to ignite the public's imagination and he reorganised with a conventional swing band in early 1937.

The following year after months of rehearsals and touring the band won an RCA Victor contract and recorded 'Begin The Beguine' which became a national best seller. Although a far cry from today's crazy media driven business Artie Shaw was pitch forked into becoming a celebrity which he disliked. Amidst the hysteria of the times and the proliferation of puerile music Artie Shaw built a repertoire based on classic American Show songs by such as Jerome Kern, Cole Porter or Rodgers and Hart. But the pressures mounted and he disbanded at the height of his fame in late 1939.

Artie Shaw reformed the following year and shot to fame again with another national best seller 'Frenesi' into which he had incorporated a string section. There were two distinct editions with Billy Butterfield and Jack Jenney, and then Hot Lips Page and Georgie Auld as main soloists. Although he was unable to seriously challenge the box office power of Glenn Miller, Tommy Dorsey and Harry James he continued to present thoughtful and innovative music until Pearl Harbour. Shaw enlisted in the Navy and eventually led an all star navy band in the Pacific Theatre of Operations. He did this with distinction till it returned to the U.S. in late 1943. He subsequently received a medical discharge in February 1944.

In Hollywood Artie Shaw formed another orchestra in October 1944 with a corps of forward looking arrangers such as Ray Conniff, George Siravo and Eddie Sauter, and with fiery trumpet soloist Roy Eldridge, set out to tour in post war America. But things had changed and the conditions no longer existed for supporting a top touring orchestra and he disbanded exactly a year later. This orchestra left a rich library of recordings including many Gershwin songs. For the next few years he busied himself with reading, writing, some studio recording but was effectively out of music.

In 1949 Artie Shaw was again persuaded to form another big band with such modernists as Al Cohn, Herb Steward, Don Fagerquist, Dodo Marmarosa and arrangers Tadd Dameron, Johnny Mandel and Eddie Sauter. It was soon clear that no viable audience existed for such a band. So for the next few months Artie Shaw resorted to standard commercial arrangements and ironically business improved. Deeply discouraged he disbanded and with the exception of a 1953 Decca studio set never again fronted a big band as a soloist.

He returned briefly to public playing in 1953-54 with a very cool quintet including Hank Jones, Joe Roland, Irv Kluger and a young Tal Farlow. Recordings of this group show how Artie Shaw's musical thinking had evolved to embrace the new music in a way that his contemporaries Goodman and Herman had never done.

He announced his retiral from music shortly after and has never again performed in public or even played the clarinet again. He gave his blessing in the 1980s to an "Artie Shaw Orchestra" led by Dick Johnson and on occasion conducted. He also conducted a programme of his music with Bob Wilber and an All Star British orchestra at the Royal Festival Hall, London in 1992.

His highly individual tone and lyric approach to interpretation plus a superlative technique have marked him as one of the great jazz clarinet players of all time-possibly the greatest. Artie Shaw had written several well received books, and had recently completed what he regarded as his major written work when he died at his home in Southern California on 30 December 2004.

Volume 1 - Artie Shaw intro. / They Can't Take That Away From Me / Softly As In A Morning Sunrise / Things Are Looking Up / Stardust / Tea For Two / So In Love / You Do Something To Me / He's Funny That Way / Let's Fall In Love / Moonglow / So Easy / Innuendo / Gue Le Le (Afro Cubana) / Summit Ridge Drive / Grabtown Grapple / Smoke Gets In Your Eyes / I Get A Kick Out Of You / Begin The Beguine / I Concentrate On You / S'Wonderful / Orinoco / Love Walked In / Krazy Kat.

Volume 2 - I Cover The Waterfront / Carnival / Comes Love / Together / Too Marvellous For Words / How Deep Is The Ocean / Don't Take Your Love From Me / Exactly Like You / Pied Piper Theme / Cross Your Heart / The Very Thought Of You / Love Is The Sweetest Thing / Bedford Drive / Love Of My Life / Smooth And Easy / Cool Daddy / Easy To Love / Minnesota (Aesop's Fables) / Similau / Fred's Delight / Time On My Hands / Love For Sale / Orinoco / Mucha De Nada / I Get A Kick Out Of You / Love Walked In / Artie Shaw sign off.


"I Only Have Eyes for You"

"The Artistry of Artie Shaw"

"The Artistry of Artie Shaw"

Summit Ridge Drive / The Grabtown Grapple / Smoke Gets In Your Eyes / The Pied Piper Theme / Cross Your Heart / Piece En Forme De Habanera / Guajira / Corcovado / Petite Piece / Andaluza / Prelude No. 17 / Valse / The Man I Love / The Mood In Question / Rendezvous For Clarinet And Strings / I Concentrate on You / Besame Mucho / That Old Feeling / Tenderly / Stop And Go Mambo / Imagination / Sunny Side Up.

Volume 1 - Intro: Tabu / If I Loved you / Little Jazz / Out Of This World / Begin The Beguine / Summit Ridge Drive / Together / Lucky Number / Intro: My Heart Stood Still / Stardust / Aitchison, Topeka And Santa Fe / I Cover The Waterfront / Scuttlebutt / Gotta Be This Or That / Just Floatin' Along / Intro: Blue Skies / I'm Gonna Love That Guy / On The Sunny Side Of The Street / Summertime / Hop, Skip And Jump / It Had to be You / Jumpin' On The Merry-Go-Round.

Volume 2 - Intro: Bedford Drive / Dancing in the Dark / Along The Navajo Trail / Softly As In A Morning Sunrise / The Sad Sack / Out Of This World / S'Wonderful / Intro: Hindustan / Can't You Read Between The Lines / Love Walked In / I Can't Get Started / Grabtown Grapple / It Might As Well Be Spring / The Glider / S'Wonderful / Night And Day / Let's Walk.

Frenesi / Alice Blue Gown / Temptation / Sweet Sue (Just You) / King For A Day / Out Of Nowhere / Jungle Drums / Frenesi / Along The Santa Fe Trail / Looking For Yesterday / Everything's Jumpin' / Concerto For Clarinet / Frenesi / Whispers In The Night / Jungle Drums / There I Go / Prelude In C Sharp / Dr. Livingstone I Presume / Nobody Knows The Trouble I've Seen / Blues In The Night / There'll Be Some Changes Made / Little Gates Special.

Begin The Beguine / Rose Room / My Romance / My Heart Stood Still / Through The Years / Stardust / Temptation / Love Of My Life / The Blues (Lennox Ave. Suite) / Prelude In C Sharp Major / Sugar / What Is There To Say / Diga Diga Doo / Yesterdays / Dancing In The Dark / There'll Be Some Changes Made / Nobody Knows The Trouble I've Seen / Jungle Drums / Rockin' Chair / Georgia On My Mind / Deep River / Sometimes I Feel Like A Motherless Child / Little Gate's Special / Swing Low, Sweet Chariot / To A Broadway Rose.


"To A Broadway Rose"

Artie Shaw and his Orchestra, the total recorded output of this edition with arrangements by Ray Conniff, George Siravo, Jimmy Mundy and Eddie Sauter. Plus four broadcast rareities.

Chantez Les Bas / Stardust / Who's Excited / Prelude in C Major / This is Romance / Dancing in the Dark / I Cover the Waterfront / Alone Together / Blues in the Night / Rockin' Chair / Is It Taboo / Beyond the Blue Horizon / Take Your Shoes Off baby / Solid Sam / Just Kiddin'Around / To a Broadway Rose / Deuces Wild / Evensong / Suite No 8 / Hindustan / Carnival / Needlenose / Two in One Blues. 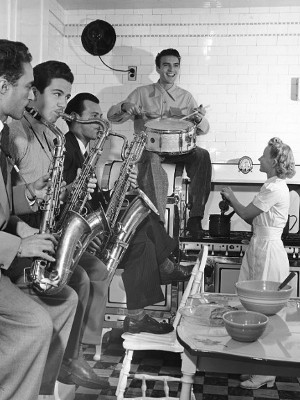 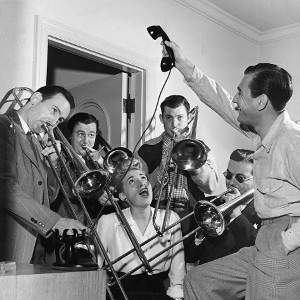 There are two video slideshow compilations of Artie Shaw available to view on the Hep Jazz You Tube.

Artie Shaw Compilation 2 features the tracks "I Concentrate On You", "They Can't Take That Away From Me", "I Get A Kick Out Of You" and "Sunny Side Up".