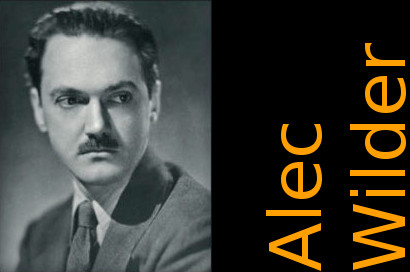 Alec Wilder, born 16th February 1907, remains one of the genuine mavericks of American Popular Music and also Modern Classical music. He had the advantages of priviledge, which he rejected early in adulthood, and his education was spasmodic including classes at the prestigious Eastman School of Music from which he did not graduate.

His mind seemed a veritable melting pot of jazz and classical forms. By the mid thirties it was the rhythmic jazz forms that took his attention. He moved to New York and mixed freely with many of the emerging talents of the day. By chance he met and collaborated with Mitch Miller, a leading oboeist, and the result was a batch of very curious vignettes comprised of woodwinds, bass, drums and harpsichord (certainly predating Artie Shaw's Gramercy Five) recorded for Columbia Records in 1938-9. The Octet recordings received quite a bit of interest if not exactly large sales as they were neither jazz nor classical but hovered in a musical no man's land. Much of the interest was aroused by the curious titles "Neurotic Goldfish" and "The House Detective Registers". The Octet also recorded with Mildred Bailey.

In the early forties he hit a rich vein with compositions like "Soft as Spring", "I'll Be Around", "Its so Peaceful in the Country" and "Who Can I Turn to" performed by many important artistes of the day such as Benny Goodman. The themes have a nostalgic wistfullness. He continued to move effortlessly between the jazz and classical worlds and became a favourite with Frank Sinatra and Tony Bennett in the late forties and early fifties. There were other artistes like Jackie Cain and husband Roy Kral, Marian McPartland, Zoot Sims, Dave Liebman and especially Marlene ver Planck who have featured his later work. Meanwhile his classical pieces were performed and recorded by the New York Brass Quintet, New York Woodwind Quintet and many other soloists.

He has also written the most important account of American Popular Songs 1900-1950. His music remains as intriguing today as when originally performed by the Octet over 70 years ago. This double CD collection chronicles the 1938-40 output and picks up some later compositions including Frank Sinatra conducting four modern pieces in 1945. He died on 24th December 1980.

This double CD collection chronicles the 1938-40 output and picks up some later compositions including Frank Sinatra conducting four modern pieces in 1945. His music remains as intriguing today as when originally performed by the Octet over 70 years ago.

Volume 1 - A Debutante's Diary / Concerning Etchings / A Little Girl Grows Up / Neurotic Goldfish / Such A Tender Night / Walking Home In Spring / Sea Fugue Mama / It's Silk, Feel It! / She'll Be Seven In May / The Japanese Sandman / Please Do Not Disturb / Sweet Sue, Just You / The House Detective Registers / Blue Room / Seldom The Sun / Her Old Man Was Suspicious / The Children Met The Train / Pieces Of Eight / His First Long Pants / Kindergarten Flower Pageant / Dance Man Buys A Farm / Bull Fiddles In A China Shop.

Volume 2 - Intro / Slow Dance / Theme And Variations / Air For Oboe / Air For Bassoon / Air For Flute / Air For English Horn / Seldom The Sun / The Neurotic Goldfish / Jack, This Is My Husband / They Needed No Words / Footnote To A Summer Love / The Children Met The Train / A Little White Samba / A Little Girl Grows Up / Remember Me To Youth / The Amorous Poltergeist / Horn Belt Boogie / Serenade For Horns / Singing Horns / Horns O'Plenty / Piece For English Horn / Goodbye John.

Sorry! There are no images at present.